United States President Donald Trump sparked outrage last year when he announced that  the US would pull out of the Paris climate agreement. The decision  frustrated world leaders because it  undermined the process of global cooperation, setting a  bad precedent for future agreements to unify countries in the effort to avoid climate disaster.

This is an example of a very common social dilemma, called a common-pool resource (CPR) dilemma. When a natural resource is open access, such as fish in a lake, everyone has to limit the amount they take individually in order to sustain the resource over the long term.

But if some people don’t cooperate, for example by overfishing or pulling out of a global climate agreement, they risk collapsing the resource for everyone else, leading others to follow suit.

Our research, published today in Nature Human Behaviour, found that some six-year-old children are capable of cooperating to sustain a CPR dilemma using strategies resembling those of the most successful real-world solutions by adults.

From tragedy to hope

Back in the 1960s, economists believed this type of environmental dilemma to be unsolvable, famously labelling these competitive traps as the tragedy of the commons.

More recent  work by Nobel laureate  Elinor Ostrom tells us that we do actually have the social skills necessary to cooperate and avoid environmental tragedy, when we can  communicate and come to  fair agreements about how a resource should be divided.

If we fail to find cooperative solutions to these dilemmas, we risk facing disastrous environmental outcomes. Understanding our behaviour and the conditions that are most likely to lead to cooperation could better prepare us to create solutions in the future.

For this reason, myself and my colleague, Esther Herrmann, at the  Max Planck Institute for Evolutionary Anthropology in Leipzig, Germany, recently set out to explore the roots of human behaviour in CPR dilemmas.

We looked at how children deal with such a dilemma in the laboratory in order to find out if these basic social skills are already present in developing children. Because children are not yet exposed to as much environmental information as adults, we asked: are children are able to spontaneously use these skills in a novel context to avoid resource collapse?

To test the social behaviour of pairs of six-year-olds in a CPR dilemma, we created an apparatus that mimicked a renewing, but collapsible common-pool resource, “magic water”. The water was slowly pumped from a clear container at the top of the apparatus into a clear cylinder, where it became accessible to the kids for the taking.

Each child and their partner had a clear box in front of them with a set of buoyant eggs inside. They used the magic water to float eggs to the top of the boxes and could then trade their raised eggs for candies at the end of the game. To collect magic water, children could turn an individual water tap on and off whenever they pleased throughout the game, which looked like this: 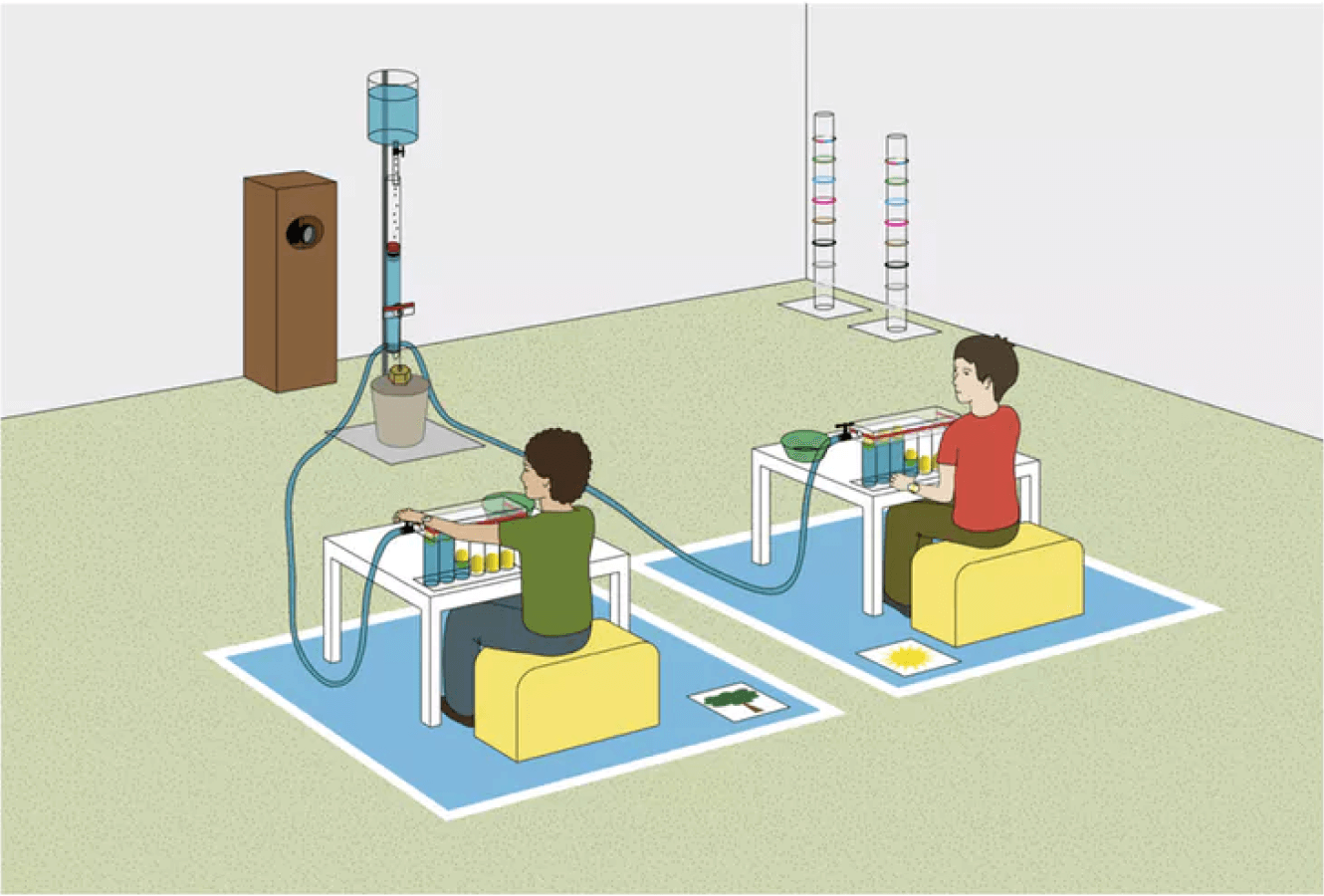 This image shows a pair of kids playing the common-pool magic water game. Each child could use the magic water to collect eggs they could exchange for candies, but if either one or both took too much water at any given time, they risked collapsing the resource. In order to get the most magic water possible, kids had to work together to sustain it, much like a real-world environmental dilemma.

There was a trick to it though: If either one or both children took too much water at any given time, they risked collapsing the resource which meant no one could get any more. To produce resource collapse, we put a bright red cork into the cylinder where children harvested their magic water. When this cork fell with the water level to a red threshold near the bottom of the cylinder, a magnet mechanism engaged, pulling out a plug at the bottom of the cylinder, dumping all the magic water into a bucket below, out of reach of the children.

Although kids were much more successful at sustaining the magic water when they had their own independent source – instead of a shared (open access) source – about 40% of pairs did find a way to sustain the magic water together. This means partners collapsed the water in the majority of trials, earning fewer candies because they succumbed to the competition of the game. As we know from research with adults in CPR dilemmas, success is far from guaranteed, owing to the competitive nature of this type of dilemma. But, the number of children who did manage to sustain the water shows these skills develop early. Our challenge will be to find ways of fostering these successful behaviours.

For the pairs who managed to avoid resource collapse, some social patterns emerged, and interestingly, these patterns resemble the successful strategies used by adults in real-world CPR dilemmas.

One pattern to emerge was a series of verbal rules many of the kids spontaneously came up with and enforced on each other.

The most successful pairs were the ones that made inclusive rules that applied equally to both partners – like “now we both wait until the water rises and then we’ll both take a tiny bit!” – rather than the unilateral rules made up to benefit a dominant child, enforced at the expense of his or her partner.

Systems of rules generated, monitored and enforced by local communities are also some of the most effective strategies for adults in real-world and laboratory CPR dilemmas. For example, many lobster fishing communities in Maine have developed local systems of mapping fishing territories throughout their accessible waters which determine who is allowed to fish where, and when.

Another pattern evident in the successful sustainers’ behaviour was a tendency for partners to have similar or equal numbers of eggs at the end of the game. In fact, partners who collected more unequal amounts of eggs tended to collapse the magic water more quickly.

This is a pattern also seen in experiments with adults – we fare better when we can establish fair resource access and equitable risk management among stakeholders.

Of course, determining what is fair in the global effort to curb the effects of climate change is more complex than a face-to-face game of common-pool magic water. But this work shows that the basic social building blocks needed to avert the tragedy of the commons develop and can be applied early.

You need to be a member of Prosocial World Community to add comments!

This reply was deleted.